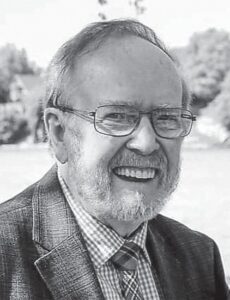 Dryden when Harold was a teenager.

Harold attended Dryden High School, but he joined the U.S. Navy before graduation.

He married Janet Lee Johnson on February 15, 1955 in Dryden, Michigan. They lived most all of their lives in the Dryden area. His wife, Janet preceded him in death on July 15, 2019.

Harold served in the Navy during the Korean War from 11/22/1954 to 02/12/1958. His last posting was to the U.S.S. Ticonderoga; he earned the Good Conduct Metal, National Defense Metal, and trained as a Radio Operator / Maintenance man. Harold worked at the Ford Motor Tractor Plant and Engine Assembly Plant in Romeo for 30+yrs. He studied to become an ordained Minister in the 1990’s and has served his Lord in the ministry of mission work on several trips to Mexico.

Funeral arrangements have been entrusted to the Muir Brothers Funeral Home of Imlay City. Harold’s cremated remains will be buried next to his wife, in the Dryden-Mt. Pleasant Cemetery, Dryden, Michigan. Those wishing to make memorial contributions may want to consider and direct them to: St. Labre Indian School, Ashland, Montana, 59004. Please be sure to sign our online register book at www.muirbrothersfh.com to share your memories and condolences with the Hamlin family.

Our family serving yours for Generations