A DATE to REMEMBER 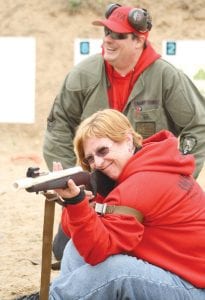 ARCADIA TWP. — April 19, 1775, is an important date in American history. Paul Revere had completed his famous ride, the battles of Lexington and Concord were fought, and the shot heard around the world marked the beginning of the Revolutionary War.

That famous date, and the events that ensued, were discussed in detail this weekend at the Lapeer County Sportsmen’s Club, amid the sounds of gun fire. Project Appleseed, a national history and marksmanship program, took place Saturday and Sunday (March 24-25) and guests walked away with a better knowledge of what American soldiers faced to form the independent nation.

Instructors lectured 20 participants throughout the weekend about the history of April 19, 1775, and then worked with each of them to improve their skills with the rifle. According to the instructors, one of the major contributing factors to the colonialists’ victory was the fact that they were better marksmen, and that was something that they wanted to pass on to others.

Area program leader and instructor Bill Glaser, along with a group of other local instructors, worked with students and adults to teach the history with application to their own firearm skills. “I think Project Appleseed has the ability to transcend the gun culture,” said Glaser, noting that the program is not specifically for gun enthusiasts. “I think we have enough appeal to attract the 97 percent of gun owners who don’t shoot regularly.”

Glaser explained that the most important aspect of the two-day program were the history lessons taught. He said that the men and women who performed courageous acts to help found the nation should be regularly remembered and honored. “Apathy, ignorance and laziness — those are the enemies that Appleseed is trying to fight,” said Glaser. “We want to make people aware of the sacrifices that were made.” The marksmanship skill taught between lectures were simply “a life skill that everyone should know.”

The team of trained instructors then led the participants through a series of marksmanship training session, teaching them a variety of shooting techniques and firing positions. At the end of the weekend, all 20 participants competed in a shooting challenge trying to score high enough to earn the coveted “Rifleman” patch, certifying themselves as top-shot shooters.

Each of the instructors themselves had all completed the Project Appleseed program, earning their Rifleman patch before moving on to other training programs to become program leaders. One of the focuses of the program is getting participants excited enough about Project Appleseed that they want to bring their friends back for another weekend or help teach others what they learned.

Project Appleseed is a 501(c)3 nonprofit organization that started in 2006 and has quickly spread across the nation. The program is now operating in all 50 states.

The next Project Appleseed event at the Lapeer County Sportsmen’s Club will take place Aug. 4-5 and will be an allfemale program. Local women and girls will be able to learn about history and firearms from a group of female instructors. For more information about Project Appleseed, go online to www.appleseedinfo.org or call the Lapeer County Sportsmen’s Club at 810-724-6579.

This site uses Akismet to reduce spam. Learn how your comment data is processed.